Photovoltaics; conversion of solar photons into electrons that flow down a semi-conductor. Main problem is low efficiency (about 10%).

To make use of the photoelectric effect, we need material that is a good conductor of electricity and which can be manufactured in bulk at reasonable cost. These conditions strongly constrain the available choices. For most practical aspects, silicon is the material of choice.

To begin with, we will consider a solid (like a semi-conductor) as any material in which the atoms are arranged in an ordered fashion. Such order is usually referred to as a crystal or a lattice. Let's consider the case of silicon.

Silicon has 14 electrons, but only the outer most 4 are available as "valence" electrons to help bond with other atoms:

In two dimensions, we can represent silicon as below: 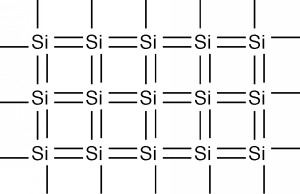 Once the atoms have been arranged like this, the outer valence electrons are no longer strongly bound to the host atom. Therefore, in principle, these outer electrons can easily be "freed" from the lattice and move through the material. The movement of electrons through material is a current.

The outer shells of all of the atoms blend together and form what is called a band. This band is called the conduction band. Electrons that are still bound in atoms are said to be in the valence band.

The difference in energy between these two bands is called the bandgap energy.

For a solar energy application, we must find a material in which there is a good match between the band gap and the incoming energy spectrum of solar radiation.

Fortunately, silicon suffices, and it's very abundant and easily mined from the Earth's crust.

Note: more exotic materials can be used to make a solar cell and make a more efficient one, but none of those materials has any cost-effective mass production ability.

So much energy is 1.11 electronvolts?

Note that all measures of PV efficiency are made at 0 degrees C when done in a lab. "Rated" efficiencies are usually done at a standard temperature of 25 C.